All three of the films in Sam Raimi's Evil Dead trilogy can safely be called cult classics, however each is very different in tone. The first Evil Dead is almost entirely a horror/gore movie, whereas the third film, Army of Darkness, is more of a sword-and-sorcery epic. They're all fun, however of the three, Evil Dead 2 is the strongest in terms of pure horror comedy. Both elements work well in the film. The story finds our hapless hero, Ash (Bruce Campbell) once again terrorized by an unknown evil at that remote cabin in the woods. Nobody does frantic insanity better than Bruce Campbell, and the scene where he battles his own demonically-possessed hand is truly classic--especially the moment when he screamingly, laughingly, chainsaws the offending appendage. (Evil Dead 2 is available for rental from Netflix, and may be purchased on DVD and Blu-Ray from Amazon.com.) 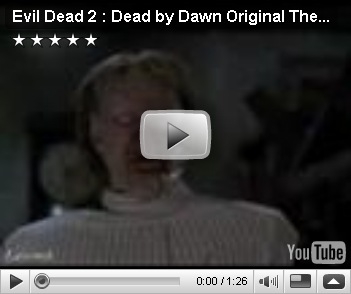 Posted by Katterfelto at 3:31 PM