One of the surprise hits of 1990, Ron Underwood's (City Slickers, Mighty Joe Young) Tremors skillfully blended horror, suspense and easy humor in its story about a pair of down-on-their luck handymen named Val and Earl (Kevin Bacon and Fred Ward, respectively), who become stranded in the remote desert town of Perfection, Nevada, and end up helping defend the town against giant carnivorous earthworms called 'graboids.' Michael Gross and country singer Reba McEntire turn in amusing performances as survivalist couple Burt and Heather Gummer. The plot was classic drive-in B movie material, but was handled so deftly, it seemed entirely fresh. One of the things that set Tremors apart from other, similar giant monster flicks was that the characters were all likable and well-drawn. We genuinely cared about what happened to them, which made the subterranean threat all the more compelling. The film was followed by two sequels, Tremors 2: Aftershocks, and Tremors 3: Back to Perfection, as well as a straight to video prequel entitled Tremors 4: The Legend Begins, which was set in the late 1800s. ('Tremors' is available for rent from Netflix, and may be purchased on DVD from Amazon.com.) 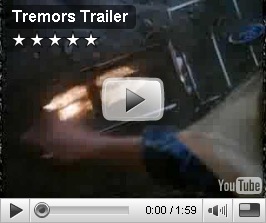 Posted by Katterfelto at 3:43 PM