The Phantom of Hollywood 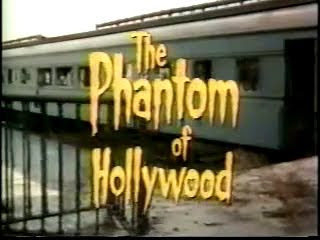 When James T. Aubrey, Jr. was appointed head of MGM in 1969, his main job was to stop the financial hemorrhaging of the struggling, once-successful studio, to which end he immediately pulled the plug on a dozen film projects and began selling off MGM property.  One casualty of Aubrey's downsizing was MGM's historic backlot #2 in Culver City, which was sold to a real estate developer.  The lot, which had long fallen into disrepair, had been used in some of MGM's most famous movies, such as Gone with the Wind

and The Wizard of Oz

, however by the mid-seventies it was worth far more as a housing development or a parking lot, or almost anything other than what it had become, which was a big dirt lot filled with rubble, old sheds and collapsing buildings. 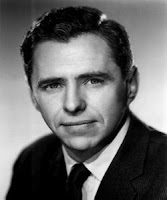 Ever the entrepreneur, Aubrey decided to see if he could shake a little more flour out of the old sack by producing a Phantom of the Opera

-style TV movie built around actual footage of the old backlot being demolished.  Faster than you can say, "We don't want it good, we want it Thursday!", a script was thrown together, and every washed-up TV star who wasn't booked on Hollywood Squares was rounded up for the cast.  It probably sounded like a cool idea, and if properly handled it might have been, however if the suits at MGM had called a production meeting and said "Hey, let's make the suckiest TV movie ever!", it couldn't have turned out much worse than The Phantom of Hollywood, in which Jack Cassidy heads an all-star cast of Hollywood has-beens in what may be the cheapest, most half-assed Phantom movie ever made. 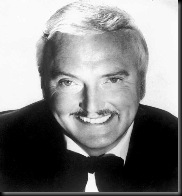 For the record, I've always liked Jack Cassidy.  He made a career of playing debonair smart-asses with titanic egos, and he was brilliant at it.  On television, he was the perpetual guest villain who always thought he was smarter than the cops, but ultimately was undone by his own hubris.  (Cassidy guest-starred in no less than three episodes of Columbo).  In movies, Cassidy was the T-Rex of scenery-chewers, whether playing the bigger-than-life John Barrymore in W.C. Fields and Me (1976), or camping it up as the outrageously Queer villain Miles Mellough in Clint Eastwood's The Eiger Sanction (1975).
With his flair for over-the-top characters, it's easy to see why Cassidy might've been a natural choice to play the theatrical title character in The Phantom of Hollywood.  With a good script, strong direction, and some decent production values, the film could have been a clever, darkly humorous thriller similar to Theatre of Blood

(1972), however that would have required wit, style, and a modest budget, all of which are conspicuously absent from director Gene Levitt's production.

It's hard to say why Cassidy did the film.  By 1974, he was rich enough that he didn't need the money.  Then again, this was the same year he was seen drunkenly watering his lawn naked in the middle of the afternoon, so it's entirely possible he didn't even know that he was in a movie. 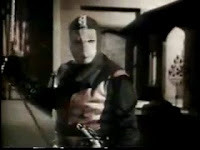 Cassidy plays hammy windbag Karl Vonner, an aspiring matinee idol who is injured on the set of his latest swashbuckler by a pyrotechnics accident that leaves him looking like Mrs. Doubtfire.  Unhinged, Vonner disappears into the dungeon-like bowels of the backlot (never mind that backlots don't have dungeon-like bowels), where he sets up housekeeping and occasionally ventures out to spook the security guards. 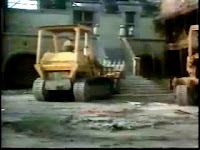 Years later, "Worldwide Studios" (standing in for MGM) decides to sell the property and bulldoze  the cruddy old buildings.  Vonner naturally takes exception to this and, like the blithering nut-job that he is, he begins lurking around the garbage-strewn lot, whacking trespassers and construction foremen with a prop mace.  We unfortunately don't get to see much of the actual attacks, because this is, after all, a half-assed 1974 TV movie, so director Levitt (the creator of Fantasy Island), inevitably cuts to commercial every time the Phantom is about to strike--(slow zoom on worried victim, cue Leonard Rosenman suspense music, fade to black)--effectively denuding the film of whatever impact it might have had, much like watching a porno movie without the sex scenes.

Every Phantom movie must have its "gala masquerade," of course, and The Phantom of Hollywood is no exception.  It seems that Worldwide Studios wants to give the old backlot a fond farewell by hosting a grand, no-expenses-spared bash, which in this case consists of some balloons and a couple of card tables.  And, to make sure that viewers don't confuse the film's "revelers" with actual gaffers on a smoke break, a handful of extras in chintzy costumes parade by, sipping punch from disposable plastic cups.  (Yep, no expense was spared.)


Masquerades are useful plot devices in Phantom movies because they allow the Phantom to mingle with the public unnoticed, which Vonner does here in his medieval executioner's getup, however he doesn't go entirely unnoticed.  In fact, he's here specifically to meet with his brother, Otto, who is also played by Cassidy, and whose unconvincing makeup vaguely resembles Dennis Franz, or Bill Macy, from Maude.

It turns out that Otto works for Worldwide Studios, and has been keeping Karl's existence a secret in order to protect his scarred brother.  However, Otto has come to suspect that Karl is behind the recent series of backlot murders, and he threatens to call the cops unless Karl ceases his bargain-basement reign of terror.  Unhappily, it is never a good idea to issue an ultimatum to a disfigured homicidal madman, as Otto learns the hard way when Karl subsequently drops a "chandelier" on him at the height of the revelries. 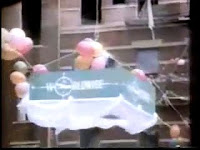 Yes, believe it or not, The Phantom of Hollywood has a chandelier scene, although it is an admittedly piss-poor one. And it's not actually a chandelier that falls on Otto, but some sort of square paper banner with balloons attached, which may be the only time in movie history that a character is crushed to death by falling balloons. Wondering how this was possible given our understanding of physics, I slowed the tape down and saw that they had weighted the works with a couple of paint cans, presumably so that the thing would actually fall instead of wafting away when the string was cut.  (I swear, I'm not making this up: you can actually see this astounding scene for yourself by watching an amusing video review of the film by PhantomReviews.) 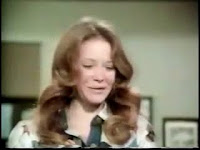 Realizing that the studio has no intention of stopping the demolition, Karl kidnaps Randy, the red-haired daughter of studio boss Roger Cross, played by half-in-the-bag lounge lizard Peter Lawford.  In a case of art imitating life, Randy is played by Skye Aubrey, daughter of then-MGM head James T. Aubrey, Jr.
At the Phantom's oddly cramped lair, which resembles the inside of a utility shed, props courtesy of Hollywood Toy and Costume, Randy and Karl have their requisite Christine/Phantom moment in which she sees him unmasked, and he gets to overact madly while explaining how he didn't always look like somebody's Irish grandmother.

) shows up and mumbles a few lines as a police captain, and before you can say "Have another drink, Mr. Lawford," the cops are closing in on the Phantom's shed--sorry, lair--where Randy's heroic love interest, Ray (Peter Haskell), arrives just in time to save her from having to suffer through any more of Vonner's bad acting. 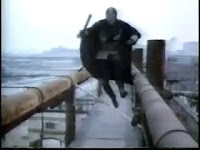 Meanwhile, Karl has somehow managed to elude the cops, and is suddenly spotted high atop a rickety catwalk that's in really bad shape, where he pauses long enough to taunt them: "You fools!", he bellows, "I am not among your ruins! I live in a world of castles, of palaces, of mansions, in dreams! My world is invulnerable to your machines, your progress! You will never find me!"
Apparently, even the catwalk has had a bellyful of Vonner's delusional ranting by this time, because the railing abruptly gives way and sends him plummeting to his (unseen) death behind some scruffy backlot shrubs, his slow-motion fall intercut with final shots of bulldozers demolishing the last remaining buildings. 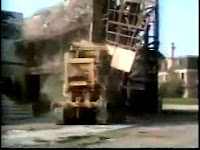 ), John Ireland (All the King's Men), Elisha Cook, Jr. (The Maltese Falcon), Corrine Calvet (The Far Country), and a raft of TV personalities whose faces you'll instantly recognize but whose names you won't be able to remember to save your life.  With its hackneyed script, Love Boat

cast, crummy locations, and cheap, flex-fill lighting, The Phantom of Hollywood oozes the kind of made-for-TV cheese that could only have been extruded during the Aaron Spelling seventies.

The Phantom of Hollywood was originally titled The Phantom of Lot 2, and was aired only once on network television, on a February 12, 1974 broadcast of the CBS Tuesday Night Movie.  The film occasionally turns up on late night television, but till recently has been unavailable to the home video market.

In 2011, the Warner Archives released a digitally remastered version of the film on DVD, which you can purchase here.

On December 12, 1976--two years after The Phantom of Hollywood--Jack Cassidy died in a spectacular fire that consumed the uppermost floor of the lavish apartment building he owned in West Hollywood. (You can read details at Findadeath.com)

On April 12, 2010, veteran actor Peter Haskell, who played leading man Ray--and who subsequently enjoyed a long and successful career as a writer, actor and director--passed away at his Northridge, California home. He was 75.

Posted by Katterfelto at 6:59 AM

Email ThisBlogThis!Share to TwitterShare to FacebookShare to Pinterest
Labels: Phantom of Hollywood