Jeffrey Combs, who's been winning rave reviews for his portrayal of Edgar Allan Poe in the one-man show, Nevermore, currently playing at the Steve Allen Theater in Hollywood, first made a splash in the ghoulish 1985 black comedy/horror film, Re-animator. Combs plays Herbert West, a young man who has a very good head on his shoulders..and another one in a dish on his desk! The film was directed by Stuart Gordon from a script based on the H.P. Lovecraft short story, Herbert West: Reanimator, and is an updated reworking of the Frankenstein story about an ambitious but unorthodox medical student who is determined to bring the dead back to life, one body part at a time. Gouts of gore, heart-in-mouth action, and wicked black humor made the film an instant cult classic. The film spawned two sequels, Bride of Re-Animator (1991), and Beyond Re-Animator (2003), neither of which were quite as much fun as the original. (You can rent Re-Animator at Netflix, or purchase the DVD through Amazon.com.) 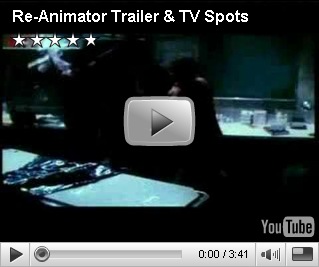 Posted by Katterfelto at 3:25 PM