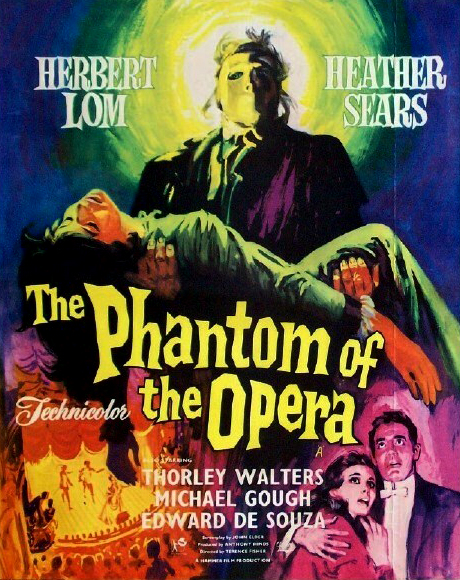 Following close on the heels of their grimmer, gorier versions of Frankenstein

) (1961), Britain’s famed Hammer Studios sought to reprise one of Universal’s most venerable horror classics, The Phantom of the Opera, based on Gaston Leroux's 1910 novella about a disfigured musical genius haunting the Paris Opera.

According to author Wayne A. Kinsey (Hammer Films: The Bray Studio Years

), the part of romantic lead Harry Hunter originally was written for Cary Grant. Grant was interested in doing the film, however he surprised Hammer executives by making it clear that he wanted to play the Phantom, not Hunter. It would have made for an interesting piece of casting--way against type for Grant--however the deal eventually fell through due to stalled salary negotiations; the part of Hunter subsequently went to Welsh actor Edward de Souza.


Writer/producer Anthony Hinds's script changed the setting from Paris to London, where, as was the case in Universal's 1943 version with Claude Rains, the Phantom is horribly burned with acid while trying to recover a manuscript that he believes has been stolen, however in this instance his outrage is justified, for his music has been stolen, by the slimy Lord Ambrose d'Arcy, played with reptilian relish by Michael Gough.

Lom's Phantom is ultimately a pitiable creature. In Universal's 1943 version, Rains's Phantom was clearly as much victim as villain, however Hammer pushes this conceit even further by revealing that it isn't the Phantom who's responsible for the opera house murders but an inarticulate half-wit called simply "The Dwarf" (Ian Wilson). The Phantom is not only a victim, he's a red herring. Moreover, instead of dropping a chandelier on the audience, this Phantom gets the chandelier dropped on him. 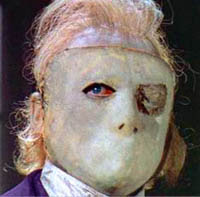 One amusing production anecdote involved the iconically eerie mask that Lom wore in the film. According to Kinsey, Hinds hired a master mask maker to draw up a variety of designs, but none of them really worked. Makeup artist Roy Ashton sketched a few ideas inspired by kabuki masks, however Hinds was tepid on those as well. When the time came to start shooting publicity stills of Lom as the Phantom, it was noted with some alarm that they still didn't have a mask. "Look," Ashton said, "give me five minutes and I'll make you one!", and he did. Ashton got an "old piece of rag," cut a couple of eye holes, patched one of the eyes with mesh, and tied the whole thing around Lom's head with a couple of pieces of string. "Great," everyone said. "That's what we want!"

Phantom enjoyed a bigger budget than most Hammer productions and was unusually well reviewed, earning guarded praise from critics who normally panned Hammer's films, however the movie was a surprise flop at the box office.

Some critics have dismissed the film due to its unfaithfulness to the source material, however a reading of the book suggests that a verbatim adaptation of Leroux's novella would likely have made for some pretty rough sledding for modern audiences. Even the 1925 Chaney film took liberties with it. I enjoyed the novel Frankenstein, for example, however it would be pretty tedious if done exactly as written, as Kenneth Branagh has proved.

Hammer's Phantom may not be canon but it has its own unique charms, chief among them Edwin Astley's creepy, soaring musical score--which is superior to that of most other Phantom films, Andrew Lloyd Webber notwithstanding--and Herbert Lom's commanding, underappreciated performance as the Phantom. He deserves some kind of award for that sepulchral voice alone.

One of the things that differentiates Lom's Phantom from others is the platonic nature of his relationship with Christine. He's a mentor, not a suitor. There are no unrequited sexual or romantic undertones. The Phantom haunts Christine not out of personal love or desire, but because he recognizes what he calls her "great gift" of a voice, and rather selflessly wants to help her in his own rough way. (Okay, he does slap her a couple of times to make a point about suffering and art, but he means well.) And there are a few unexpectedly poignant moments, such as the glimpse of a tear in the Phantom's one good eye as he listens to Christine singing. When he engages in animated exchanges with imaginary people, it's clear that he's slowly losing his mind, poor fellow.
Hammer's Phantom of the Opera is hardly the lushest adaptation ever lensed--it's almost minimalist--however, it is an interesting take on an old story, with great music, credible performances, a loathesome villain, and a compelling central performance by Herbert Lom. It may not be what Leroux intended,  but it's definitely worth a second look. 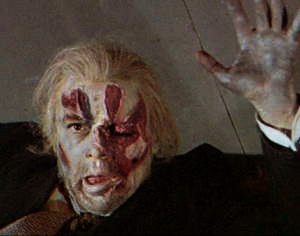 Theatrical trailer for Hammer's The Phantom of the Opera:


A video review of the Hammer version by PhantomReviews:

Email ThisBlogThis!Share to TwitterShare to FacebookShare to Pinterest
Labels: The Phantom Of The Opera (1962)