Of the 181 films in which Vincent Price appeared during his career, his favorite was Theatre of Blood, a wry black comedy/horror film about a deranged actor named Edward Lionheart (played by Price, of course), who begins killing off pompous theatre critics using death scenes from Shakespearean plays. The film co-starred the always-interesting Diana Rigg as Lionheart's protective daughter, Edwina, along with a stellar cast of British stage and film stars including Ian Hendry, Jack Hawkins, Coral Browne, Harry Andrews, Michael Hordern, Robert Coote, Arthur Lowe, Robert Morley, Dennis Price, Milo O'Shea, Madeline Smith and Diana Dors. Price is at the top of his game here, hamming it up with shameless glee as he metes out gory death to his weasely detractors: ('Tonight we shall play Cymbeline as it has never been played before!') Interestingly, it was while filming Theatre of Blood that Vincent Price met Coral Browne, whom he would marry the following year. (You can rent 'Theatre of Blood' at Netflix, or buy the DVD from Amazon.com.) 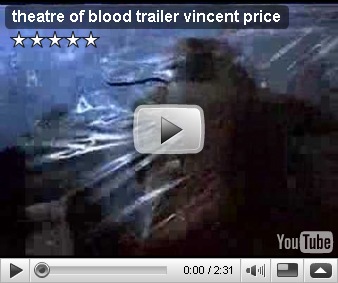 Posted by Katterfelto at 1:44 PM

Email ThisBlogThis!Share to TwitterShare to FacebookShare to Pinterest
Labels: Technorati, Theatre of Blood