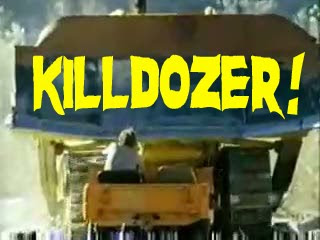 In the far reaches of the galaxy, a mysterious flash leaves a ring of red gas that expands and fades, but not before disgorging a cobalt-blue meteoroid. The stone is cratered with ancient cosmic impacts, and emits strange beeps and hums as it tumbles through the void of interstellar space. Earth looms ahead, blue and green with wisps of white. The coast of Africa swells into view. On a deserted island, the sky flares blindingly bright as the buzzing, beeping meteor crashes with a glowing blue SPLAT. The glow pulses and fades, leaving a smoldering heap of partially-melted meteorite.

Thus opens Killdozer!, an enjoyably ridiculous 1974 TV movie about a bulldozer that comes to life and goes on a murderous rampage after being possessed by an evil alien intelligence. In the long, colorful history of sci-fi movies, Killdozer! is easily the best bulldozer-on-the-loose monster flick ever made. Actually, it's the only one ever made. Nevertheless, it's one of the few made-for-TV movies that genuinely deserves to be called a cult classic. 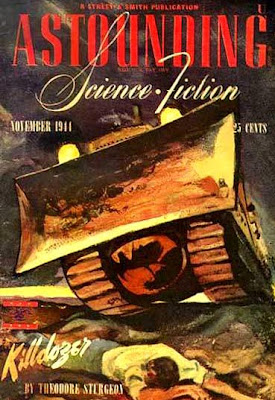 The film was based on a 1941 novella by Theodore Sturgeon, who also wrote the teleplay. Sturgeon was a science fiction writer whose stories appeared in such classic magazines as Astounding Science Fiction and Fantastic Adventures, and were a huge influence on writers such as Harlan Ellison and Ray Bradbury. Sturgeon later wrote several episodes for Star Trek: The Original Series

(Sept. 8, 1966, to June 3, 1969), however his most enduring contribution to the lexicon may be Spock's signature phrase, "Live long and prosper," which first appeared in Sturgeon's script for Episode #30, Amok Time (season 2).

Sturgeon's original novella was set on an uninhabited Pacific island during World War II, where a construction crew accidentally ruptures an ancient sarcophagus while building an airstrip. The disturbance releases a deadly energy creature entombed eons ago during a war fought with "sentient machines." As the monster had been created specifically to turn enemy machines against their owners, the escaped entity infects the closest machine at hand--a bulldozer, which begins operating of its own accord and killing off members of the team.


Sturgeon's 1974 movie adaptation switched the setting from a WWII Pacific atoll to an island off the African coast where a construction crew unleashes an extraterrestrial entity trapped in an ancient meteorite. The entity is released when the half-buried meteorite is struck by the blade of a bulldozer, though the being's origins and motivations are never explained. 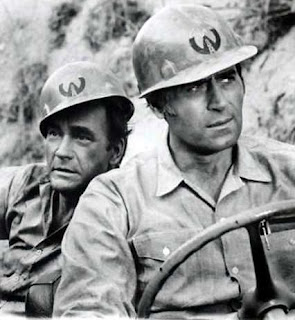 , The Night of the Grizzly, The Dirty Dozen) plays Lloyd Kelly, a senior construction foreman for Warburton Oil Resources, a Halliburton-like company planning to drill for oil on an unnamed island 200 miles off  Ivory Coast. Lloyd is sent ahead to hack out a base camp on the island with the help of heavy equipment operators Dennis Holvig (Carl Betz), Dutch Krasner (James Wainwright), Al Beltran (James A. Watson, Jr.), and "Mack" McCarthy (Robert Urich), along with crusty veteran mechanic Chub Foster (Neville Brand) to keep the equipment running.


Kelly is a recovering alcoholic who is hoping to use the thankless assignment to redeem himself with the company. He has five days to finish the project, however failure is not an option. As he says to a company rep during one of their daily shortwave radio chats, "You tell Warburton that nobody's letting him down. He's got my personal guarantee that this job's coming in right on the money."


Unfortunately, things get off to a rocky start. Literally. When the youngest member of the team, Mack

McCarthy (Robert Urich), attempts to clear rubble from the base of a cliff, the blade of his big Caterpillar D9 bulldozer slams into a half-buried rock that won't budge.


As Kelly climbs into the bulldozer, McCarthy hears a strange whirring noise and puts his ear to the boulder. The noise is coming from the stone.

Kelly shifts into gear and rams the blade into the half-buried boulder. The rock begins pulsing with an intense bluish light, which Kelly doesn't see because the blade is in the way. The amorphous glow leaches out of the stone and into the blade, and Kelly suddenly finds himself fighting the controls, as if the machine has acquired a mind of its own.

McCarthy is suddenly blinded by a weird flash of blue light. He collapses, screaming in agony.


Back at camp that night, McCarthy lies dying, his face scorched and peeling as if from radiation burns. "Did you see it?", he croaks.

"I saw it jump when the blade hit the rock!", McCarthy gasps. "I'm trying to warn you, Kelly. Blue light! My God, it's there in the blade!"

The strain is too much. McCarthy gasps and dies.

"Better get a tarp," Kelly tells the others. "We're going to have to bury him." 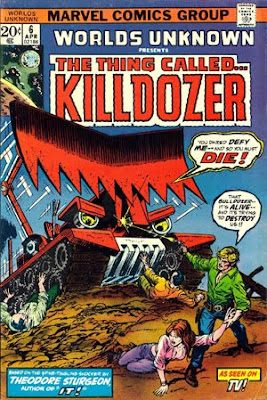 Later, Kelly returns to the accident site and stares at the bulldozer, trying to work out what happened. He studies the half-buried stone and the immense blade. Climbing into the cab, he starts the machine.


A strange whirring noise is heard as the headlights flare to life, resembling a pair of malevolent eyes. Kelly shifts into gear, and once again the controls leap out of his hands and begin moving as if controlled by an invisible intelligence. Powerless to  stop the out-of-control machine, Kelly cuts the fuel line and tumbles from the cab in a jet of vaporized fuel. To his horror, the bulldozer abruptly turns on him before he can regain his footing. As he pushes himself away from the charging blade, Kelly narrowly escapes being cut in half when the bulldozer abruptly stalls and dies from lack of fuel.

Towing the disabled bulldozer back to camp, Kelly has a word with Chub, the mechanic. "The D-niner," he says. "I want you to check her out in the morning, and I mean good."

"You find out, and then you tell me," Kelly replies cryptically.

The following morning, before Chub can look at the
'dozer, crewman Al Beltran (James A. Watson, Jr.)
hops into the cab and fires up the mammoth earth
mover. Predictably, the bulldozer goes berserk. As
Al fights the controls, the maniac machine barrels
through camp, crushing the shortwave radio on its
way into the bush.

Al panics and leaps from the cab of the careening
juggernaut, and in one of those moments of exceedingly poor judgment that only happens in movies like this, he crawls into a length of flimsy, cardboard-thin corrugated pipe that happens to be in the direct path of the runaway machine.

Kelly arrives on the scene just in time to see Al and the pipe squashed into a sort of flattish man-burrito before the bulldozer disappears into the surrounding scrub.

"The D-niner was operating by itself when it ran him down," Kelly tells heavy equipment operator Dennis Holvig (Carl Betz). "Throttling, pivoting, floating the blade."

What follows is a war of nerves as the surviving members of the team are terrorized by the rogue bulldozer. Like a rusty terrestrial Jaws

, the Killdozer strikes without warning, ambushing the men and ramming their trucks. One man is crushed to death, another is burned alive. The infernal machine puts out their signal fires, and pushes boulders over cliffs onto them as it picks off the crew one-by-one. The machine even taunts them by peeking over nearby hilltops, waving its blade as if in triumph.

It's all utterly ridiculous, of course, but fun nevertheless. And there are a few moments that are oddly creepy in a silly sort of way. One night, before the bulldozer turns mankiller, Betz steps out of his tent for a smoke right in front of the mechanical behemoth. The giant blade raises slowly, silently behind Betz and suddenly slams to the ground only inches from his heels, scaring the bejeezus out of him. In another comically creepy scene, Betz sees the bulldozer late at night, rooting around in the scrub like some kind of giant mechanical wart hog from hell.

In the most spectacular scene, Kelly and Dennis battle the bulldozer with a giant bucket excavator until one of the cables snaps and they are forced to flee.

I won't say much about the climactic ending, other than to say that it was blatantly ripped off by Jaws 2

four years later, which, believe it or not, was actually a much suckier movie than Killdozer!

The only part of Killdozer! that's a little annoying is the very end, when Clint Walker throws his hard hat into the air and it does a Mary Tyler Moore freeze-frame as the sappy wrap-up music plays over the hurried closing credits so typical of TV movies.

In spite of its boneheaded premise, or perhaps even because of it--after all, that is sort of the elephant in the room--Killdozer! is thoroughly enjoyable. Given the lunatic audacity of trying to make a science fiction movie about an invisible alien using only six actors and a couple of pieces of rusty construction equipment, the real question is why it turned out to be as entertaining as it did.

The answer had to do with the talent behind the film. Producer Herbert F. Solow was a veteran producer and former Vice President of Production at Desilu Studios, where he had worked on the Star Trek series. Director Jerry London was--and still is--one of the most prolific and successful directors in the industry, with episodes of Hogan's Heroes

to his credit. (In 1980, London won an Outstanding Directorial Achievement Award from the Directors Guild of America for his epic mini-series, Shogun

Further classing up the act was cinematographer Terry K. Meade, who had previously lensed the great Jacques Deray thriller The Outside Man

, and who would later work on the critically-acclaimed series Hill Street Blues

. With Killdozer!, Meade forswore the usual all-purpose deep-focus shots typical of most TV movies, opting instead for narrower focal lengths and more naturalistic lighting that gave the film a more cinematic look.

The on-screen talent was also of high caliber. Clint Walker had long been a favorite of movie and TV audiences due to his chiseled features, likeable personality and strong physical presence. (There are unconfirmed rumors that Walker, who is a hardy 83 years old, has been approached by Sylvester Stallone to play the father of Stallone's character in the upcoming Rambo V).

), and the usually affable Carl Betz (The Donna Reed Show

, Judd for the Defense) playing way against type as the amusingly sarcastic Dennis Holvig, the second-biggest pain in Walker's ass next to the Killdozer.


Killdozer! initially aired on Saturday February 2, 1974 on the ABC Saturday Suspense Movie, after which it periodically turned up in reruns on Saturday afternoon or late night television. The film was also released on VHS and DVD, but is difficult to find today. (About six years ago, I found a previously-viewed VHS of Killdozer! in the clearance bin at a local Blockbuster outlet.)


There's talk that Warner Bros. Archives is planning to release a digitally remastered version of The Phantom of Hollywood, another made-for-TV cheesefest that aired the same year as Killdozer! (1974)

Tell you what, fellas. Throw in The Last Dinosaur

THE PHANTOM OF HOLLYWOOD (Made-for-TV-movie, 1974)