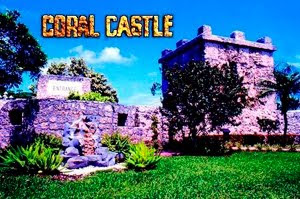 Above: the amazing Coral Castle near Homestead, Florida

With its mild subtropical weather and picture-postcard scenery, Florida has always been an irresistible lure for filmmakers as well as tourists, the result of which is that many of the Sunshine State's numerous natural and manmade attractions have wound up in the movies. One of the kookiest locations ever lensed is The Coral Castle, located in Miami-Dade County north of Homestead, near the intersection of U.S. 1 (South Dixie Highway) and Southwest 157th Ave. (See map here)

The story behind The Coral Castle is almost as odd as the movies that were made there. Almost. We've all had our hearts broken at one time or another, however most of us eventually get over it. Edward Leedskalnin was one of the exceptions. When his capricious 16-year old fiancé gave him the bum's rush on the day before their wedding (he was 26), he did what any mad-as-a-hatter Latvian immigrant might do: he moved to Florida and spent the next 28 years carving a giant "storybook castle" out of solid coral in homage to his fickle princess. 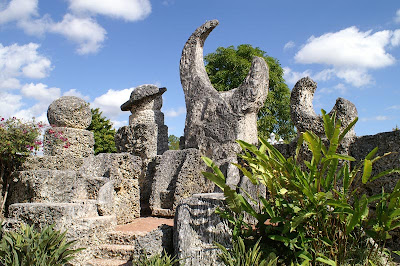 Ed worked entirely alone, yet he was able to carve and precisely place enormous blocks of stone, some weighing almost 60 tons, though nobody ever figured out how he did it. When Ed died in 1951, he took the secret with him.

Throughout his life, Leedskalnin had written about his unusual theories of electromagnetism. Aficionados of the paranormal suggest that Ed had somehow found a way to harness previously unknown supernatural or electromagnetic forces. As evidence of this, they point to the rusting shards of the incomprehensible electromechanical apparatus located in the tower laboratory where Ed once conducted his experiments. Weird! 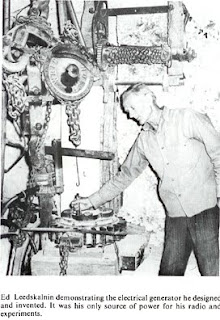 Old newspaper article (left) showing Ed Leedskalnin with some of the weird machinery in his laboratory in the watchtower at The Coral Castle. 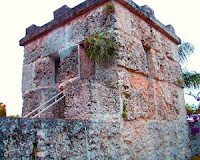 Tower containing the
laboratory where Ed
conducted his strange
experiments. Some of
the original apparatus
can still be seen.

Ed died intestate in 1951, and the property changed hands several times--the exact chain of custody is a little murky--however the Coral Castle remained a popular tourist attraction for fans of the paranormal and lovers of odd Floridiana. A few enterprising filmmakers even used Coral Castle's Flintstones-meets-Frankenstein aesthetic as a backdrop for their low-budget crackpot films.

THE WILD WOMEN OF WONGO 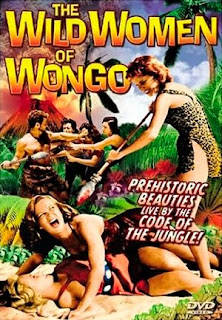 In 1958, The Coral Castle was used as the "temple of the dragon god" in James L. Wolcott's The Wild Women of Wongo, an unbelievable spears-and-coconuts jungle epic wherein a group of aboriginal South Sea islanders are portrayed by a bunch of pasty, sunburned white people in cheap Flintstones costumes who look about as Polynesian as David Caruso with a spray-on tan. A few of the actors have some white shoe polish smeared in their hair, which I think is supposed to suggest that they're old, but it's hard to tell. It just looks like they have white shoe polish smeared in their hair. In addition to Coral Castle, several other south Florida tourist attractions were also used as locations, including Tahiti Beach, Parrot Jungle and Fairchild Tropical Garden. One of the most unintentionally hilarious jungle movies ever made, Wild Women of Wongo must be seen to be fully appreciated in all of its boneheaded ridiculousness. The best performer in the film? Coral Castle, which actually looks pretty cool.

NUDE ON THE MOON 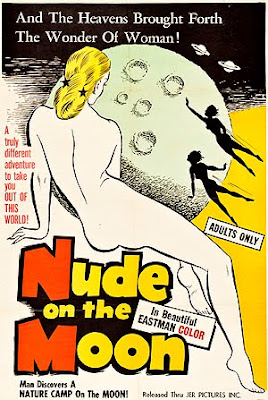 In 1961, Coral Castle made up for Wild Women of Wongo by appearing in Doris Wishman's astounding
Nude on the Moon, a nudie sci-fi sendup about a pair of Miami astronauts who land on the Moon only to discover that (1) it looks just like Miami; and (2) it's filled with topless girls!

, however I would beg to disagree with the great Joe Bob. Nude on the Moon isn't nearly as sleazy as it sounds. There's actually a kind of sweet innocence about the film, aside from which it's so utterly lunatic it's brilliant.

If there were an Oscar category for most sincere performance in a ridiculous movie (and there ought to be), Lester Brown and William Mayer would surely have been nominated for their work in this jaw-dropping sci-fi nudie cutie in which they play a pair of intrepid astronauts who discover the first interplanetary nudist colony.

Brown plays dedicated young scientist Jeff Huntley, who decides to use his $3 million inheritance to finance a trip to the Moon along with his mentor and colleague, "the professor" (Mayer). 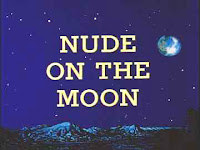 One of the amazing things about the film is the amount of time and care devoted to exposition and set-up. The extended opening sequence is surprisingly well written for a Wishman film, and is not much more ridiculous that most any legitimate second-tier sci-fi movie from the same period. Brown and Mayer are credible and convincing throughout, which only makes the lunacy (no pun intended) all the more surreal. 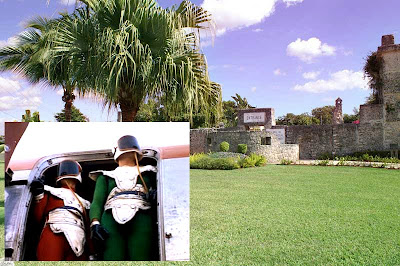 Landing on the "Moon," Jeff and the Professor step out of their rocketship in their longjohns and toy space helmets into a sunny tropical landscape of blue skies and rustling palms. After collecting a few gold nuggets lying in the freshly-mown St. Augustine bahia, they discover a megalithic enclave populated by topless telepathic "moon dolls."

Instead of mugging and going for obvious laughs, Brown and Mayer play it completely straight, their deadpan performances making the whole thing all the more hilarious.

Top billing is afforded nudie model "Marietta," who appears in the dual roles of Brown's secretary, Cathy, and the Moon Queen. She was obviously cast on account of her physical attributes, yet she is actually not a bad actress, and her brief scenes as Brown's lovestruck secretary are sincere and believable. 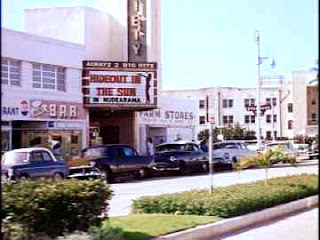 A sly in-joke occurs whilst our astronauts drive through North Miami Beach on their way to the launch pad. Just as Clint Eastwood walked past a movie marquee advertising the Eastwood-directed Play Misty for Me

, Brown and Mayer drive past Miami Beach's Variety Theater, the marquee of which is emblazoned with the title of another Doris Wishman film, Hideout in the Sun

(in 'Nuderama!') The old theater still stands today, however it has since been refurbished and renamed the Paris Theater.

as might be viewed from the moon, accompanied by the catchy title song Moon Dolls, written by Wishman's neice Judith Kushner and sung by Ralph Young, who would later partner with Belgian singer Tony Sandler to form the famous recording duo of Sandler and Young

. (A year after Nude on the Moon, Young appeared as the romantic lead in another Wishman film, Blaze Starr Goes Nudist

, though his voice was dubbed and he is credited under the pseudonym "Russ Martine.")

Interestingly, Doc Severinsen of The Tonight Show Starring Johnny Carson arranged the film's score--one of the classier things about the film--however contrary to persistent rumor, Severinsen does not actually appear in the film. 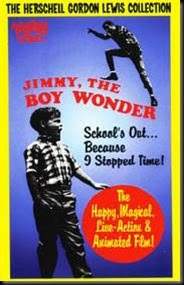 When one hears the name Herschell Gordon Lewis, "kiddie movie" usually is the last phrase that leaps to mind. One usually thinks Wizard of Gore

eye-gouging, spike through the head, squishy guts. That kind of thing, not kiddie movie. Nevertheless, Lewis actually made at least two of them: Jimmy, the Boy Wonder (1966), and The Magic Land of Mother Goose (1967), both of which he shot for other people, so they weren't really his idea anyway.


Jimmy, the Boy Wonder was shot partially on location at Coral Castle, and is a musical fantasy starring little trouper Dennis Jones as a lad who is able to freeze time solely by force of his bad acting. "I wish time would stop!", he declares somewhat unconvincingly, and time does stop, by golly!

It seems that every thousand years, the "Great Clock" at the end of the world opens up to admit the Sun's rays, during which time the machinery is vulnerable to negative thoughts. Apparently little Jimmy's selfish wish got in there and monkeyed up the works!

The great cosmic Astronomer realizes what's happened and sends his fair young daughter, Aurora--played by tubby, forty-something Nancy Jo Berg (whose husband Hal wrote the script)--down to Earth to fetch Jimmy so that they can travel to the Great Clock and get it going again.


Sometimes the screen changes colors. At one point the film contains a badly-dubbed Italian cartoon (with Lewis doing the cartoon voices), and there's also a convenient visit to "Slow Motion Land" that helps pad the film out to its full 69 minutes.

Jimmy, the Boy Wonder is a benignly grotesque little movie that is endurable primarily because it is so hilariously maladroit. Only H.G. Lewis could have made a film like this and gotten away with it. As with all of Lewis's films, it's better than almost anything by Andy Milligan because you can actually see the actors and hear what they're saying, however it will likely appeal only to hardcore Lewis fans and those who enjoy a spiteful laugh at the expense of a bad movie. Can't say it's really boring, though. Probably a good movie to watch with a bowl of weed.

The funniest description of Jimmy, the Boy Wonder comes from Kiddiematinee.com, who describe the film as resembling "an evil LSD home movie for kids."

Scores of speculative documentaries and television segments have been shot at The Coral Castle, the most famous of which may be Leonard Nimoy's investigative program In Search of...,season 5, episode 16, The Castle of Secrets, which included a dramatization of Ed Leedskalnin moving the enormous stones by use of a mysterious force.

It's a safe bet we haven't seen the last of The Coral Castle on film or television. The place is available for shoots, and the rent is surprisingly low. With Hollywood so in love with sequels and remakes, can Nude on the Moon 2 be far off? Gosh, I hope not!


CHECK OUT CORAL CASTLE'S WEBSITE
Posted by Katterfelto at 5:08 PM