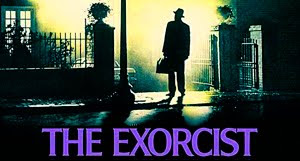 I'm referring, of course, to William Friedkin's The Exorcist (1973), which, over thirty years after its initial release, still has plenty of high voltage shocks.

As with the bestselling William Peter

Blatty novel on which it is based, the film opens in the sun-blasted deserts of northern Iraq, at an excavation near the ancient city of Nineveh, where archaeologist and priest Father Lankester Merrin (Max von Sydow) discovers a small dragon-like ceramic head among the old coins and shards of pottery.  The significance of the artifact isn't immediately apparent, however the discovery is disturbing enough for Merrin to reach for his heart pills and excuse himself from the dig. "There's something I must do," he vaguely explains.

Half a world away, actress Chris MacNeil (Ellen Burstyn) is in Washington shooting her latest movie, Crash Course, directed by Burke Dennings (Irish character actor Jack MacGowran), an alcoholic to whom MacNeil is romantically attached.

While on location for the shoot, MacNeil and her 12 year-old daughter Regan (Linda Blair) are renting a comfortable townhome in upscale Georgetown. One evening, MacNeil discovers a Ouija board that Regan has found in one of the closets. Curious, MacNeil invites her daughter to play, however the planchette unexpectedly darts away from her hand.

"You really don't want me to play, huh?", says MacNeil.

"You know," Regan explains, "I make the questions and he does the answers." 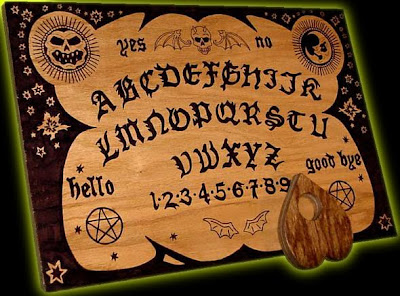 English style Ouija board with wooden planchette. The "talking board" was first devised as a 19th-century parlor diversion. The modern Ouija board

Unfortunately, "Captain Howdy" turns out not to be as childish or harmless as the name sounds. Regan's innocent experiments with the Ouija board have opened a doorway to hell, and the big guy himself is coming through.


The first clue that something is wrong comes the next morning at breakfast, when Regan complains that she had trouble sleeping. It seems the bed kept shaking. That very same morning, a local priest is horrified to find that a statue of Mary has been unattractively accessorized with set of exaggerated conical breasts and phallus. Clearly the work of the Devil if not a vandal with poor taste.

During a physical exam, Regan begins acting erratically, knocking an electronic thermometer out of the doctor's hand and uttering obscenities. That night, during a party at the MacNeils', Regan unexpectedly appears in the living room in her nightgown. She calmly urinates on the carpet as she tells one of the guests that he's about to die.

It is the beginning of a quick trip to Hell Town, population Regan.

The following night, Regan's bed shakes violently as she bellows profanities in a weird voice. The doctors blame muscle spasms.

Later, when MacNeil returns from a desperate conference with Regan's doctor, she is stunned to learn that Burke Dennings has been killed in a fall from an upper story window. As the investigating detective, Lt. Kinderman (Lee J. Cobb) later explains, Dennings was found at the bottom of the steps "with his head turned completely around, facing backwards." (Weirdly, Jack MacGowran, who played Dennings, died of the flu before he finished shooting his scenes, which explains his sudden disappearance from the film.)

The doctors can't seem to find the cause of Regan's frightening behavior. Each battery of tests leaves them more puzzled, and as the multiplying villainies of the girl's afflictions leave her mother at wits' end, MacNeil's doctor makes an unorthodox suggestion: exorcism.

"It's been pretty much discarded these says," says Dr. Klein (Barton Heyman), "except by the Catholics, who keep it in the closet as a sort of embarrassment. But it has worked, although not for the reasons they think. It's purely a force of suggestion. The victim's belief in possession is what helped cause it, so in that same way, the belief in the power of exorcism can make it disappear."


MacNeil, who is not a religious woman, discounts the idea until a horrifying episode in which Regan sexually mutilates herself with a crucifix and then attacks MacNeil, knocking her across the room. 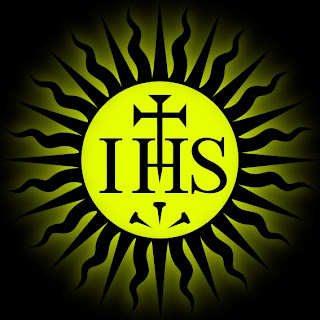 Right: The symbol of the Jesuit Order, or Society of Jesus, the Catholic religious order to which Fr. Karras belongs. Founded in 1534 by Ignatius of Loyola, the Jesuits played a significant role in the Counter-Reformation, and became known for their emphasis on academic disciplines.


"If a person is possessed by a demon or something, how do they get an exorcism?", MacNeil asks Fr. Karras.


"Well, the first thing," Karras says dryly, "I'd have to get them into a time machine and get them back to the 16th century. It just doesn't happen anymore."

When MacNeil tells Karras about Regan, he dismisses the idea of exorcism and offers to see the girl, but only as a psychiatrist.

"Not a psychiatrist!", MacNeil erupts. "She's seen every fucking psychiatrist in the world and they sent me to you! Now, you're going to send me back to them?"


Karras finally relents, and when he sees Regan for the first time, her formerly cherubic face is an ashen moonscape of gouges and scabs. Her eyes burn with a cold, eerie light, and her ankles and wrists have been bound to the bedposts to prevent self-mutilation. 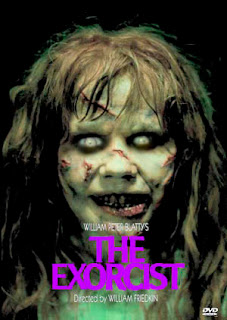 "And I'm the Devil," Regan says in a growling, animalistic voice.

After a few minutes of verbal sparring, she abruptly spews green vomitus into Karras's face in the infamous, much-lampooned "pea soup" moment.

As an experiment, Karras sprinkles tap water on the girl, telling her it's holy water. Her violent reaction leaves Karras skeptical, however shortly thereafter he observes an eerie phenomenon. Entering Regan's freezing bedroom, he is thunderstruck to see the words "help me" appearing on the girl's belly in swollen lesions.

Convinced at last that Regan is possessed, Karras obtains permission to perform an exorcism, however the bishop insists that a more experienced priest perform the rite, someone who has "spent time in foreign missions."

It so happens that Father Merrin (Max von Sydow) has recently returned from Iraq and is working on a book at Georgetown University's Woodstock Theological Center. Moreover, Merrin is an experienced exorcist, having performed the rite several years earlier in Africa.

"The exorcism supposedly lasted months," says the Bishop. "Heard it damn near killed him."

Merrin will perform the rite, with Karras assisting. 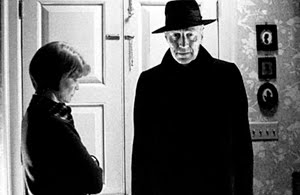 The events of the film all build toward Merrin's arrival, gladstone bag in hand, like some kind of contemporary Van Helsing, armed with rituals, crucifixes and holy water, prepared to confront his old nemesis over the soul of an innocent girl. The only thing missing is a wooden stake, however it will be of little use here: Merrin's enemy isn't Dracula, it's Dracula's boss.

one of the most terrifying and unforgettable movies of all time. The final twenty minutes are harrowing in a skin-crawling way that almost transcends the medium. If The Passion of the Christ was the closest thing some people have had to a religious experience, The Exorcist is its satanic equivalent.

One of the things that made the film work so well was novelist/screenwriter William Peter Blatty's attention to detail. I am not a Catholic--I'm not even religious--however I know enough about such things to be annoyed by the laziness endemic to most religious-themed horror thrillers (i.e., the execrable Stigmata, and the boneheaded End of Days, for example), the makers of which seem to think that a few stained glass windows and actors in cassocks will lend sufficient ecclesiastical gravitas to whatever theological mumbo-jumbo they invent for the film. If one intends to make a movie whose plot depends heavily on certain faith-specific religious conventions, it's important to know a little about those conventions instead of trying to "make something up." If you want us to buy into your movie about the Antichrist, for example, at least get the theology right if not the back story. The Devil, as they say, is in the details. 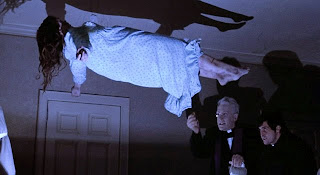 Similarly refreshing is Friedkin's non-condescending attitude toward the characters. The Catholic church has always been a popular target of derision, and sometimes deservedly so. Clerical sex abuse aside, I am often irked by Hollywood's typically unimaginative portrayals of Catholic religious as cartoonish buffoons or Snidely Whiplash villains. Some are admittedly loathsome, however Torquemada and Cardinal Law notwithstanding, neither movie characters nor the audiences that pay to watch them are charitably served by hackneyed stereotypes. Friedkin avoids this by making his Jesuits thoughtful, highly educated men who might have become doctors or lawyers had they not chosen religious vocations.

Playwright and stage actor Jason Miller, who had never appeared in a film before, is adroitly cast as the troubled, stoic Father Karras, while the great Swedish actor Max von Sydow brings enormous moral authority to the role of Father Merrin. If you're going to do battle with the Devil, he's the kind of guy you want on your side. (Gotta watch out for that bad ticker, though.)


Friedkin, who had previously directed The French Connection, does an interesting thing by structuring the movie more like a murder mystery than a conventional horror film. The Exorcist essentially is a supernatural crime thriller with Merrin and Karras the investigating detectives. Unfortunately, the good guys don't always get their man. Merrin and Karras manage to save the girl, however they pay a predictably steep price for their heroism. As is usually the case in any conflict involving God, Man, and the Devil, Man can always be counted upon to come out the worse for wear. 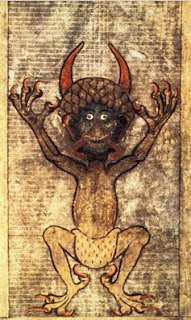 Illustration of The Devil from the Codex Gigas, a massive 13th century religious manuscript containing an ancient Latin translation of the Bible and a host of other texts including a collection of magic formulas. The Codex is also known as 'The Devil's Bible' because of the satanic imagery and the legend that it was written by a Benedictine monk who sold his soul to the Devil.

The premise that the very Prince of Darkness, the archetypal Devil of two thousand years' worth of inculcated Christian theology--ostensibly the most powerful spirit in the universe aside from God--would be bound by the niggling rules of a 19th century parlor game seems as ridiculous as crucifixes and vampires. And it is. But it still works, because our painful awareness of our finite mortality inspires the hope of an afterlife and a willingness to believe in the possibility of the supernatural, for better or worse. After all, if there's a Devil, there must be a God, right?

Even for those who aren't particularly religious, the symbology is so deeply ingrained in our popular culture and our inherited memories that we still respond to it on an almost primal level. If that were not the case, we'd be laughing off devils and vampires as superstitious nonsense rather than buying tickets to see movies about them.

The Haunted Boy of Cottage City: the Cold Hard Facts Behind the Story That Inspired 'The Exorcist, Mark Opsasnick, Strange Magazine

Posted by Katterfelto at 5:34 AM

Email ThisBlogThis!Share to TwitterShare to FacebookShare to Pinterest
Labels: The Exorcist