Dracula And Caligula In 3D 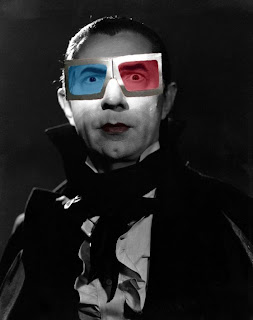 The latest movie gimmick is 3D, which isn't really new, it's just been improved to reduce eye strain. The old 3D never bothered me, but it gave some people headaches. My neighbor Sam, for example, once told me that 3D movies made her head hurt, and she couldn't even see the 3D effects.

I've never had a problem with 3D, however I could never see those stupid magic eye pictures, remember those? They were made up of little blots of color, and if held just so, and stared at long enough, would allegedly reveal 3D images of porpoises or unicorns. I was at a party once where a bunch of boneheaded stoners were staring at one of those damned things and saying "Wow! Cool!", and I was the only one who couldn't see it, and I was like, "Aw, the hell with it!", so I understand how Sam feels about 3D movies.


They have gotten better, though. And now, thanks to James Cameron's Avatar

, 3D has finally evolved beyond the level of a one-off gimmick into a certifiable trend. Hollywood is now power-crapping these things so thick and fast, it's hard to keep track of exactly how many are in the pipe at any given moment. However, in the nerf-blizzard of mostly juvenile animated 3D movies reportedly in production, two titles recently caught my attention: Dario Argento's Dracula and Tinto Brass' Caligula.

To paraphrase Mickey Rourke in Spun

The two films are claiming to be the first 3D movies ever produced in Italy, which may seem surprising until you realize that Italians haven't needed 3D because they've had Sophia Loren, Gina Lollobrigida and Monica Bellucci.

According to Shock Till You Drop, Argento's 3D Dracula is scheduled to begin shooting in

Italy in January 2011. It sounds like a great idea except that it's being directed by Dario Argento, who is long past the day when he was capable of making genuinely effective horror films, like Suspiria


Argento always had a great visual sense, and his gore effects were inventive, however these days he seems to have devolved into the Brett Ratner of Italian slasher films. There inevitably comes a point in his movies--usually about halfway through--when the effort of attempting to care about what happens to the dumb-assed characters becomes so burdensome that we wish they would just die so we could all go home. Argento's Phantom of the Opera (1998) was so spectacularly mediocre that it gave me a headache, but then I should have known better than to watch anything with Julian Sands in it.

In any case, I doubt Argento's version could be much more entertaining than Paul Morrissey's outrageous Blood for Dracula (1974). That film wasn't in 3D, but nobody really cared, what with the likes of Dominique Darel, Stefania Casini and Silvia Dionisio lounging around naked most of the time.

But Argento's Dracula won't be the first 3D horror film ever shot in Italy. That honor goes to another Morrissey film, Flesh for Frankenstein (1973), which starred the insane Udo Kier as the most lunatic Baron Frankenstein of all time. 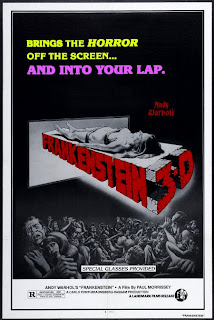 Flesh for Frankenstein is still one of the most eye-popping, jaw-dropping horror films ever made. It's certainly one of the goriest and sexiest, with bats, boobs, and geysers of blood pulsing into audiences' faces in glorious Technicolor 3D.  I saw an original 3D print of the film at a revival screening several years ago, and it was amazing. I'd like to see them bring that one back!

If the worst thing that a movie can be is boring, Tinto Brass' 3-D reworking of Caligula promises to be anything but.

In a January article in The Hollywood Reporter, Brass explained said he was planning to "revisit an abandoned project about a Roman emperor that was ruined by Americans." Presumably this was a reference to Bob Guccione's gerrymandered 1980 production of Caligula, from which Brass was unceremoniously absented over creative differences. But if Brass was put out by Guccione's attempt to turn Caligula into a big-budget skin flick, his indignation seems a little disingenuous in light of what we know about his intended "remake," the stupefying premise of which is so breathtakingly idiotic it's almost irresistible.

Email ThisBlogThis!Share to TwitterShare to FacebookShare to Pinterest
Labels: Dracula And Caligula In 3D